What is the deal with changes to the front page?

It appears that today Stack Exchange has changed the appearance of the MathOverflow front page. It now looks more similar to Stack Overflow. The most noticeable change is that the counts of answers, votes, and views to the left of each question has been condensed. I don't know how long Stack Overflow has looked similar to this.

It's especially unfortunate because just last week we introduced changes to make viewing reputation on the site become opt-in. These changes appear to be completely broken by today's changes. I'm disappointed that nobody at Stack Exchange thought to mention these imminent changes to us as we seek to implement the reputation opt-in feature.

The last time I noticed such a large change in the appearance, there had been months of announcements on the network-wide meta leading up to the changes, but I can't find anything similar this time.

Question 1: Were these changes announced at all before they went live?

Question 2: What is the scope of the changes? I've noticed two things:

Are there other changes I'm missing?

Question 3: Are there more changes on the horizon?

Question 4: What is the context of these changes? Is this a continuation of the "new site themes" evolution?

I find the new site basically unusable, and don’t expect to continue much participation here if it stays in its current form.

Tim requested more details. The main point is that I can't skim the main page because the data is in unpredictable places and too small to read without concentrating. Every time my eye tries to move it gets stuck reading words like "votes" and "views" over and over again, while getting drawn away from the question titles. I end up just looking at how many answers each question has without knowing what question I'm looking at.

2nd Update: Yay! It's so much better now. It will still take some getting used to, but fixing the highlighting for followed tabs and putting the votes on top goes a long way to making it usable again.

It's a change that happened network-wide today, so the reason it looks like Stack Overflow looks is that StackOverflow also changed today (it was hard to tell this directly because apparently when the wayback machine indexes the front page of StackOverflow, it doesn't actually see the front page with all the questions, but just some banner.)

Sorry this is not an answer exactly, but: did the frontpage change for everyone else again? 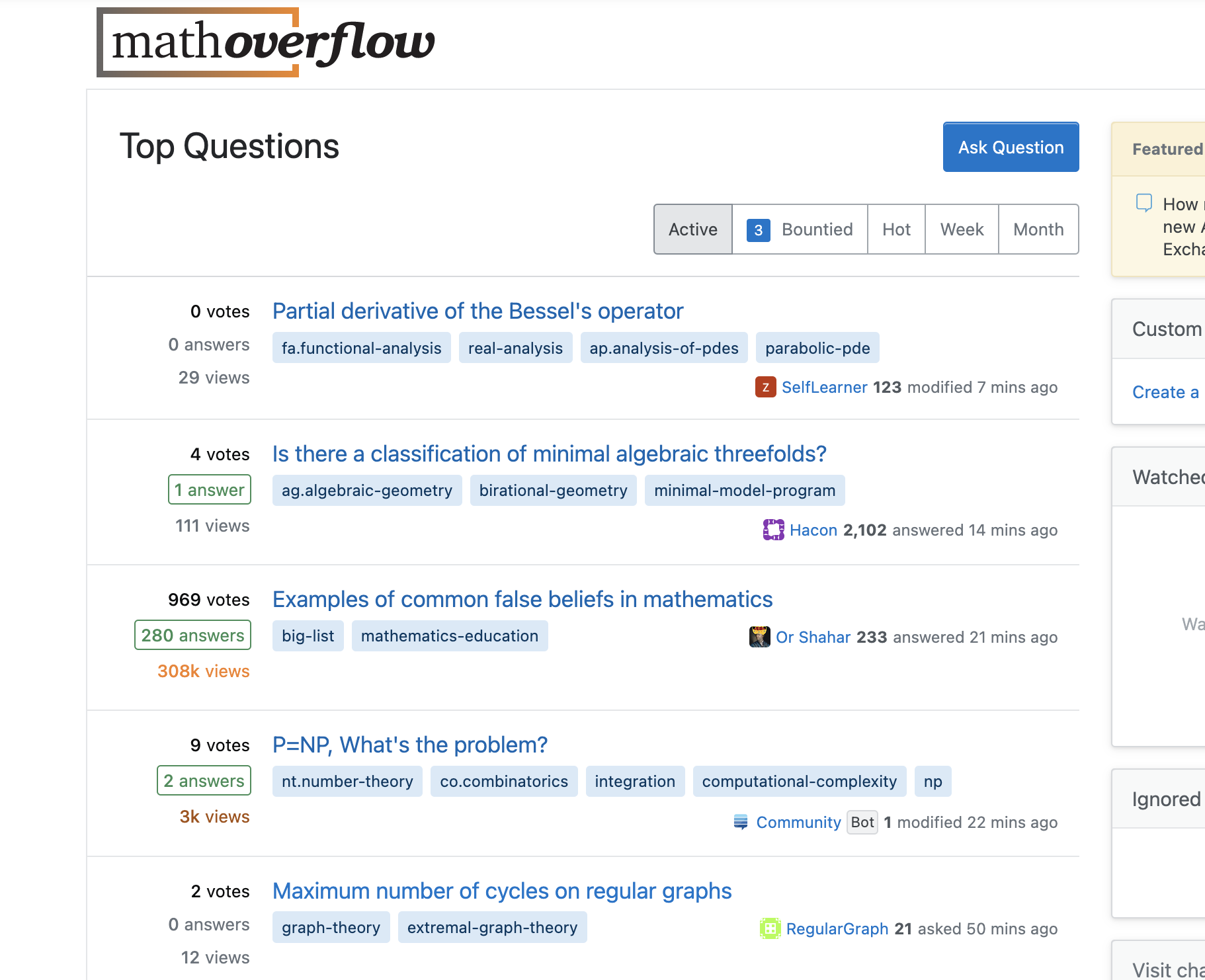 At the moment, I can see two versions of the homepage on my phone, perhaps because my phone cached some formatting data — I am not sure which is current. 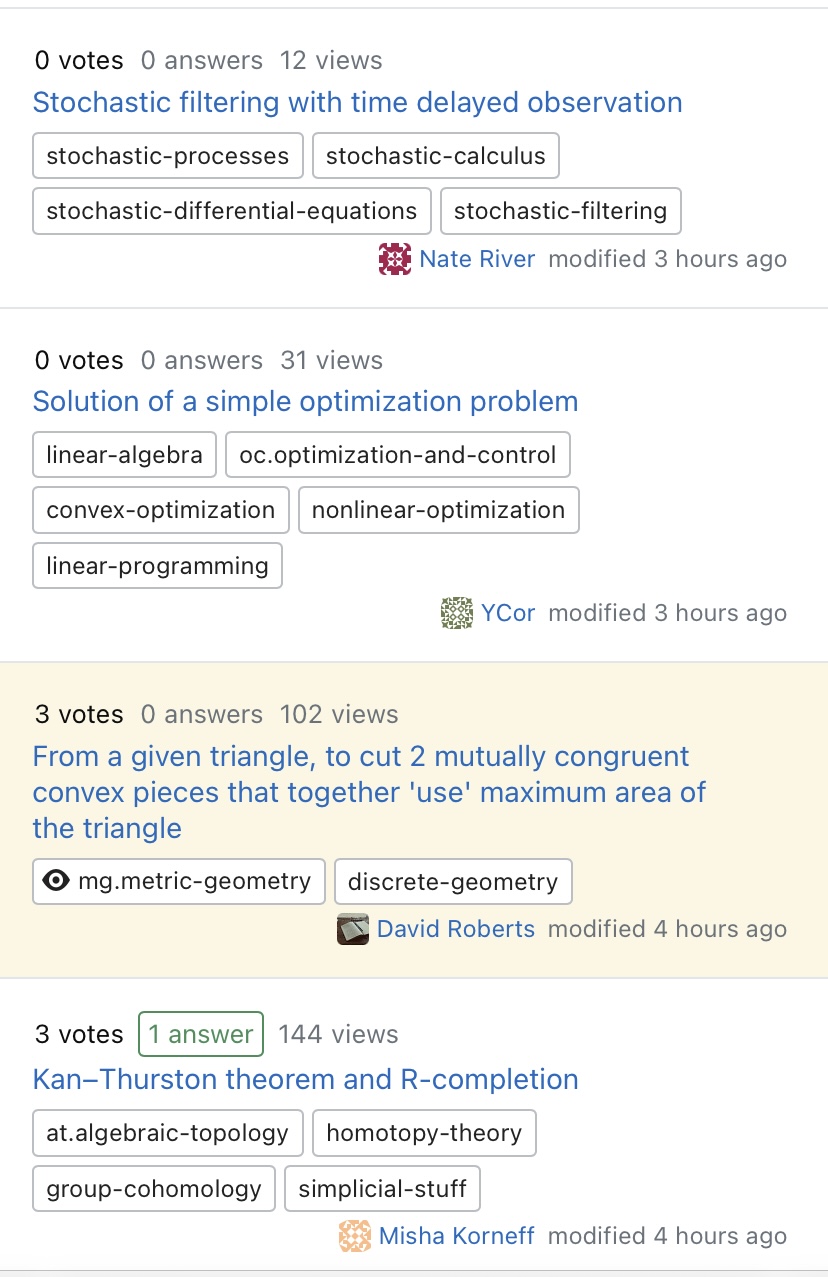 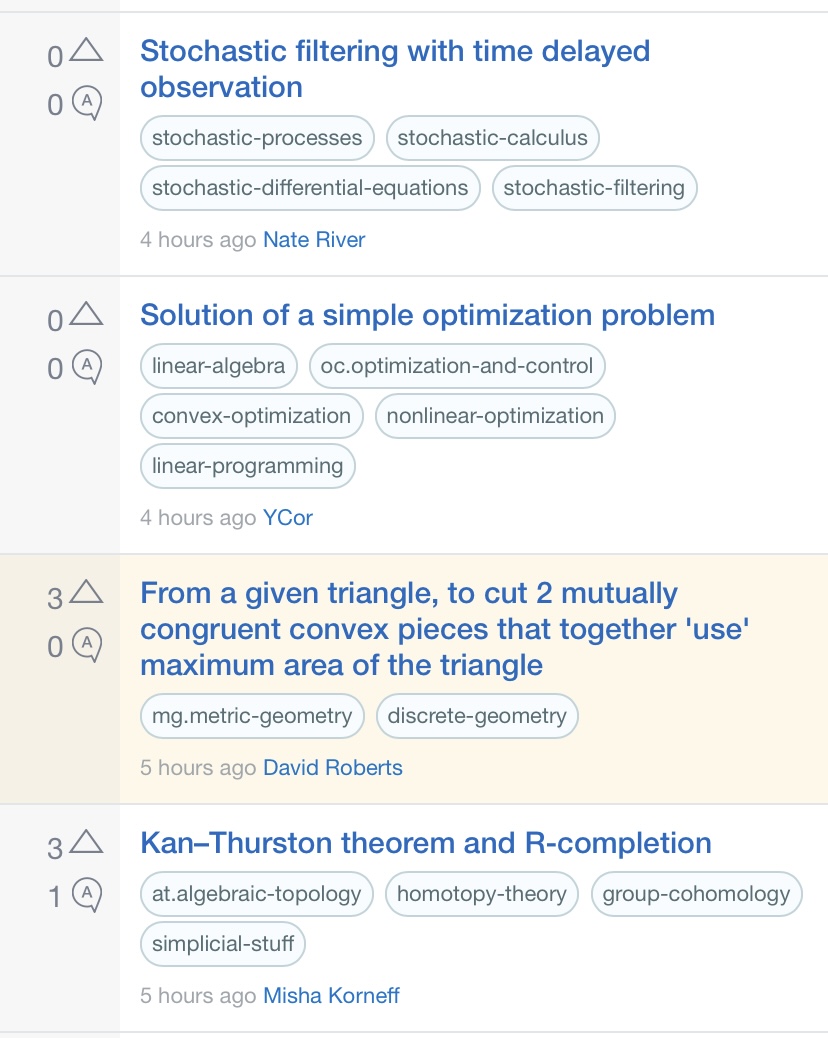 I much prefer version B, with white space above the question text!

Update: Now, instead of this problem, some MathJax does not render for me.

See the blank space in the middle of the rendering of question 2 below.

-19
MathOverflow updated site theme is ready for testing!
37
Viewing reputation and badges is now opt-in and compatible with the new front page
16
Bringing back the old front page with custom CSS: a guide
7
How is TeX rendered in edit summaries?

4
What is wrong with the tag excerpts?
3
Broken links in old answers
3
Front-page not displaying questions
7
Tabs on the front page
24
How can I customize site in my browser to get "old feel" look of MathOverflow?
12
Problem with posts and comments relying on macros defined elsewhere
2
What is up with the "Question feed" vs. "Related Questions"?
12
Was the custom close reason mentioning Math.SE removed?
Question feed