For a long time, these two custom close reasons used to be available:

The second one now seems to be gone. So I wanted to ask:

I am aware of the recent post by one of the moderators: Revamping the closure reasons in 2022. (Actually, I took the wording of the second closed reason from the screenshot in the post.) I might have missed something, but I do not see any mention of removing the mention of MSE completely. (I've seen a suggestion to modify that close reason in Tim Campion's question and an answer posted there suggests to merge the two close reasons into one. But neither of those two proposals suggest to remove the link to MSE.)

I am aware that there were some suggestions to remove the close reason explicitly mentioning Mathematics Stack Exchange. There was a question about back in 2019 which - among other things - mentions this suggestion: Are we making it too tempting/easy to send inappropriate posts to MSE? But no answer was posted there - only several comments.

I have seen suggestions along these lines in comments. For example, in this recent discussion.

There were also several questions asking what is actually the difference between these two close reasons. (And sometimes how the one about Math.SE is different from migration.)

I am not saying the this change is bad. (My stance whether or not this was an improvement would be neutral.)

But I was surprised that this was changed without some previous announcement or some clear consensus in the previous discussions. (If I missed the announcement or the discussion about the removal of that close reason, then I apologize for an unnecessary post.)

A screenshot showing what I see as the custom close reasons at the moment (as of 2022-06-04, when this question was posted): 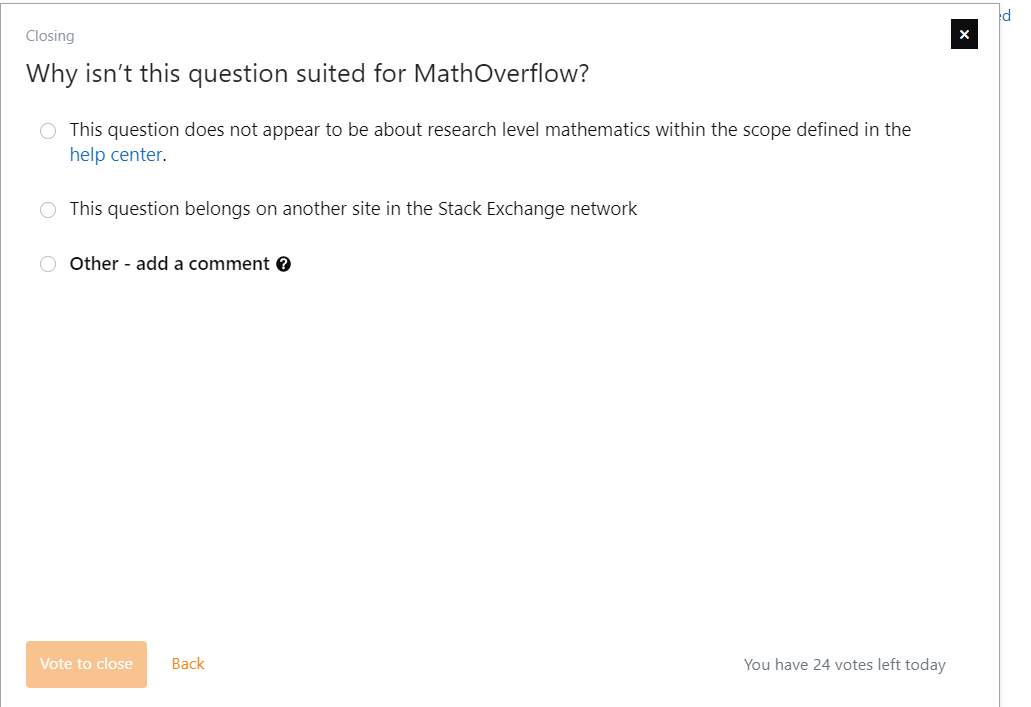 Update. In the meantime one additional close reason was added: "This question is either a request to check work for correctness or an announcement of results....." There is a separate question about this new close reason: New community close vote reason.

The screenshots and texts of the versions we've seen so far are posted in this chatroom. (Feel free to use that chatroom for discussion related to the new close reason, if you prefer chat to comments.)

It is a bit unclear whether the mods plan to make further changes. But the comments below this question suggest that they might be plans to modify them further. (Specifically, I mean Stefan Kohl's comment saying that: "The updated "not research level mathematics" close reason will point users to Math.SE, with a somewhat longer and better explanation.") Moreover, I would expect that that when the changes are finished, the mods will post some kind of announcement here on meta.

We've changed the close reasons; as mentioned, this question came mid-stream. See the answer here for an explanation.

Not the answer you're looking for? Browse other questions tagged discussion support math-stackexchange close-reasons .

14
Revamping the closure reasons in 2022
20
Are we making it too tempting/easy to send inappropriate posts to MSE?
11
New community close vote reason

7
Custom closing link looks too much like it should be a migrate to MSE link
28
Migrating to Math.SE: too many close reasons
12
Problem with posts and comments relying on macros defined elsewhere
14
change in voting to close
14
Revamping the closure reasons in 2022
Question feed