Problem with posts and comments relying on macros defined elsewhere

MathJax supports possibility do define macros. (Using \newcommand, \DeclareMathOperator, \def, etc.) They are certainly useful, however sometimes they can cause minor problems - for example clash of macros defined differently in two different posts. Therefore it is recommended to enclose them within \begingroup .. \endgroup. Now the Stack Exchange software encloses each post/comment in \begingroup .. \endgroup.

This was changed relatively recently. (In the past this was not done automatically - so the posts contained \begingroup .. \endgroup only if it was included manually by the poster or editors.) Here is copy of the relevant part from Recent feature changes to Stack Exchange:

2019-01-14: On sites with MathJax enabled, the effect of \newcommand and similar directives is now scoped to individual posts and comments rather than the entire page. (Bug report on Math.SE's meta)

One side effect of this change: In the past some users might have posted answers relying on macros defined in the question or comments relying on macros defined in posts. In such cases, the macros will no longer be rendered correctly. (Although they were working fine at the time of the posting.) The question is what to do with such posts and comments.

I certainly do not want to cause flood of flags for the moderators. But I will assume that there will not be too many such comments, so most likely this will not be a major problem. But still it would be good to have confirmation whether flagging is the way to do.

EDIT: Of course, there might be even cases when the comments cannot be fixed - in the cases when the edit (either expanding the macro or including the definition directly into the comment) would lead to number of characters above the allowed length of a comment.

You can find also further examples in this chatroom, if you search for mathoverlow, mathoverflow.net or the messages tagged mathoverflow.

EDIT: One of the commenters asks how many comments/posts were affected by the change. I do not have an easy way how to find all content affected by this. As you can see in the chatroom I linked to, I searched for some specific common names (\Spec, \Hom, \Ext, \norm), etc. I was able to find some examples but not many of them. (Most what I found is listed in today's chat transcript. Of course, feel free to use the linked chatroom if you have additional suggestions how to search for such posts.)

I was surprised that I found several posts and comments where somebody used a macro which wasn't defined anywhere on the page. In the other words, the macros are not rendered, but it was not caused by the recent change described here - it was a mistake made already when posting. (I was surprised mainly because I expect a typical MO user to have some experience with LaTeX. But I have also made many mistakes in my comments and posts which I would have noticed if I checked them more carefully right after posting - so such things do happen.) 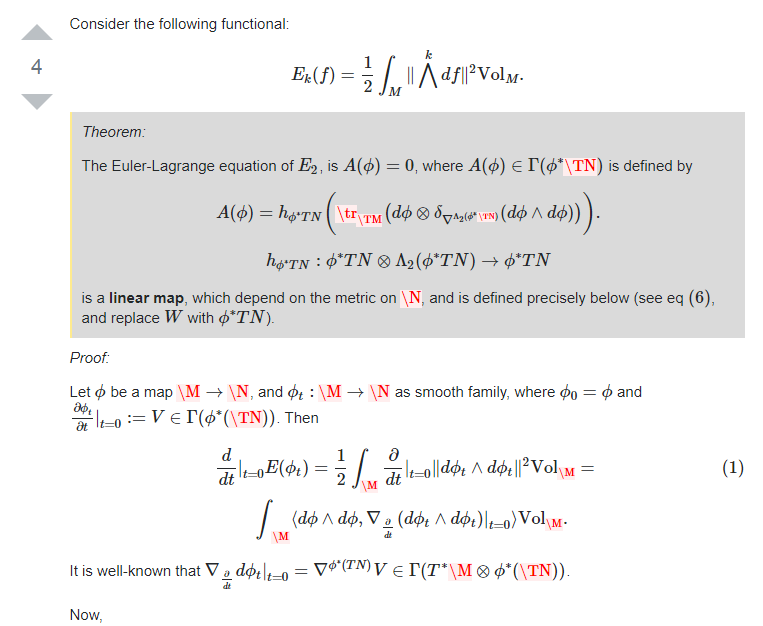 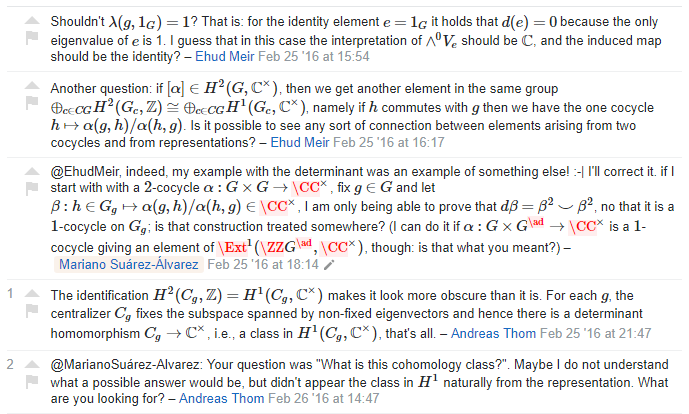 This is a community wiki answer intended as a place to collect examples of posts and comments which are examples of the described problem. Feel free to add further examples if you find some more. (But let's restrict this to examples where the problem was caused by the recent software change described in the question - not those posts/comments where the poster simply made a mistake used a macro that wasn't defined anywhere.)

This answer is posted partially as a response to the comments asking how many "problematic" posts and comments are there. (Of course, without some systematic way to search for them, the list is very likely to be incomplete.)

Not the answer you're looking for? Browse other questions tagged discussion support mathjax editing flagging .

16
Do we have an unofficial quota on how many old questions one should bump for minor edits in a single day?
26
Which Latex / MathJax features do we need or want to have supported on the site?
4
MathJax \newcommand appears persistent across the whole page

19
Dealing with possible incorrectness
14
Illustrating posts of others
16
Is there a problem with answers clarified in comments, but the clarification not reflected in the answer itself?
10
What to do when a post contains a "suspicious" link (possibly with copyrighted material)?
20
What to do with links to arXiv front end?
2
Why is a user with many upvoted posts shown with reputation 1?
12
How to make welcoming comments on "homework-like" posts that will be closed?
Question feed