There seem to be automatically generated comments by "Community".

As an example, this question by a new user has

Please clarify your specific problem or provide additional details to highlight exactly what you need. As it's currently written, it's hard to tell exactly what you're asking. – Community Bot

Just for completion, the question is

My rough understanding is that such messages occur in some case involving new users, and poorly received questions (currently 1 downvote 1 closing vote 0 upvote). Is the algorithm to generate such comments known? Are such automatic comments useful in any way? Are they supervised by moderators?

[Indeed in the present case, this generic message is not really useful (I remember seeing other cases where it wasn't either). What OP asks is very clear, but somewhat open-ended (which is OK in some cases), and definitely shows no effort by OP (since OP asks for a definition that is available at many places). ]

At least this part of the question has been basically answered in the comments:

Is the algorithm to generate such comments known?

Some of the comments explaining where these comments come from have been deleted in the meantime - but they can still be seen in the MathOverflow chatroom.

I.e., these comments are not actually "automatically generated" by the software - they are chosen by MathOverflow users who review the questions in these two review queues.

These comments come from the first questions and the first answers review queue. When reviewing in these queues, the user gets an option to leave a comment. It is possible to write your own comment or use one of the predefined options (canned feedback}. It is also possible to leave the comment signed by the Community user or post it as your own comment.

Here is a screenshot taken from the First questions review queue. 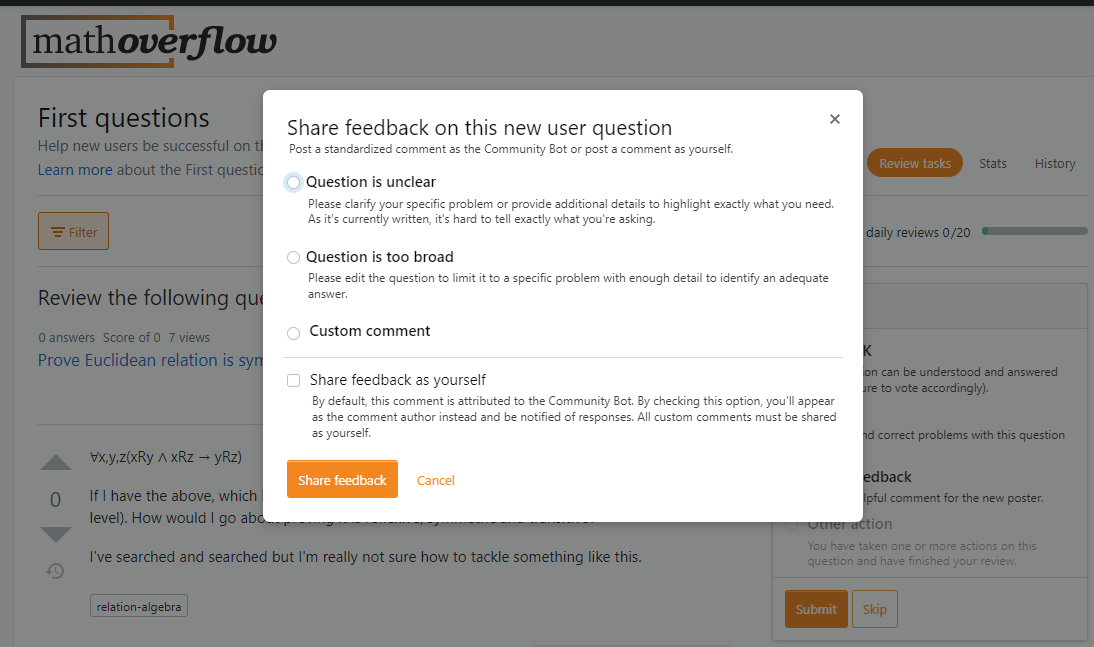 More details can be found here:

27
Explicitly pointing out math.stackexchange when (new?) users ask a question
13
Usefulness of longer tags
11
Can a definition make a good question?
80
Should we exercise a bit more tolerance towards newcomers?
12
Problem with posts and comments relying on macros defined elsewhere
39
Catering to professional appearance a bit much?
34
How can we attract more grad students?
Question feed