Has MO traffic decreased a bit since the invasion of Ukraine?

I check the review queues several times a day, each day. I have noticed a significant drop of posts in the queues that I am watching (First questions, First answers, LQP, Late answers). Even the statistics associated to each queue seem to confirm this. Anyway, this impression is entirely subjective. Could anyone with a bird's view over the whole MO community (i.e. access to numbers and SEDE queries) confirm whether this is indeed real (i.e. fewer questions, fewer answers, fewer edits, fewer new users etc.)? It seems to me that reading the war news and commentaries has absorbed the attention of many (at least this is what I do for most of each day), with less time dedicated to mathematics as a consequence, and I want to check this conjecture.

(I can't find any relevant tag for this question other than "discussion".)

Yes. Weekly analytics show a clear drop in posts and votes since the week when the war started:

To complement the answers already posted, here are some SEDE queries. (SEDE queries have the advantage that they can be run by any user - and they also can be easily run on other sites. And also if we run those queries at some future date, we get an updated information. On the other hand, site analytics contain also some information which isn't available SEDE - for example page views or visits. And most of the queries show counts grouped by week - again to make the comparison easier.1)

Specifically, if we look at the first query - with the number of posts - we get the following graph. (I have posted graphs in such way that they are cut off at the end of the week - in the previous version, I included graph where the most recent datapoint counted only one day of a week - which might seem a bit misleading without an additional explanation. It would probably be good to update the pictures a few weeks later - to see how the trends change after that. EDIT: Both graphs are now updated to show what the situation looks like at the end of April. And of course, you can run the same queries at any point in the future - do not forget to change the parameters of the queries if you want to see the results over a longer period.) 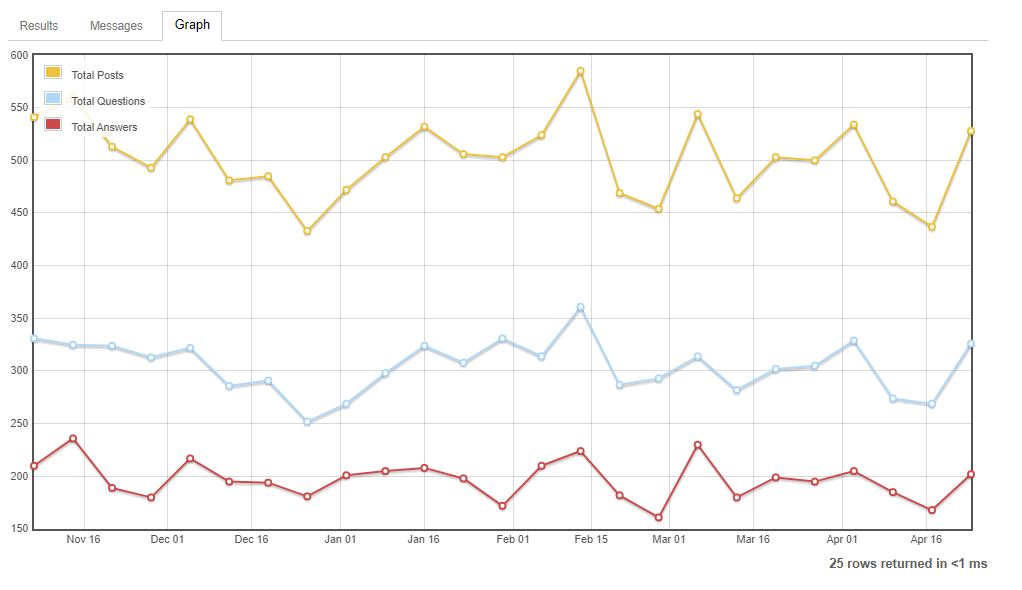 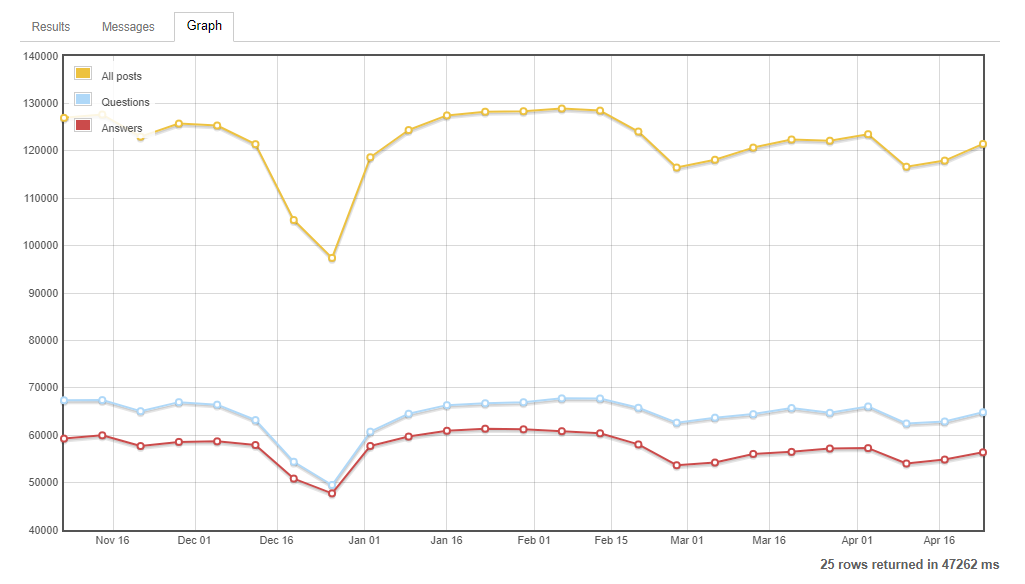 1To get the beginning of the week, I followed this answer on Stack Overflow: Get the week start date and week end date from week number

No. From a bird's eye view on the analytics, going from 1/1 until 27/2, there were one very unusual peak on the 31st of January, and a slightly higher than average (but not significant enough) increase on 7th of February.

Other than this, it looks like business as usual in the "number of visitors" and "total page views" graphs. The above data was taken from the moderator analytic tools.

10
Does the number of answers really drop over years?

18
How long until MathOverflow will be part of the Stack Exchange Data Explorer?
20
Traffic from the list of hot network questions
24
Should MathOverflow require registration to ask a question?
9
Traffic follows work-week and holiday schedules
16
Should moderators in some cases remove a question from the network-wide hot questions list?
8
Two traffic observations and questions
Question feed