Proposing a change to the close-vote interface

The feature request in this post is at the bottom; I will first highlight why I think it should be implemented. Currently, when I go to close-vote a question I see the following pop-up menu: 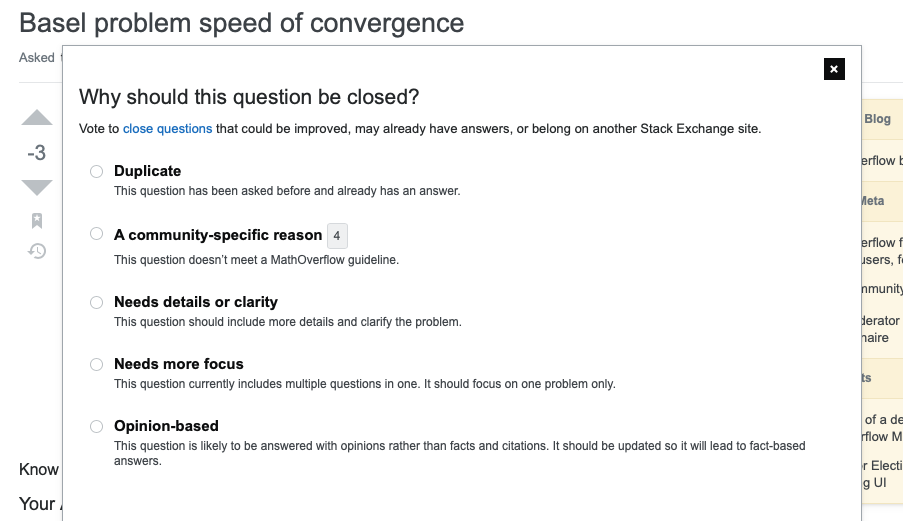 If I click the second option (as most close-voters usually do in my experience) I am presented with the following menu:

Now, if I feel like the question belongs on math stackexchange in its current format I would typically click the second option above -- I just recently found out that this is the incorrect course of action to get the question migrated in its current format. To achieve that, I should have been clicking the third option above labeled 'This question belongs on another site in the stackexchange network', bringing up the following menu:

From here, if I click the second option and vote to close (and at least two other voters do as well) the question will, upon recieving it's fifth close vote, immediately be migrated to math stackexchange in its current format with all answers and net-positive vote scores intact, and any net-negative vote scores reset to $0$. (also any associated rep gains here will be wiped and transferred over to math stackexchange).

This seems, to me, a very counterintuitive system.

Those of us feeling particularly generous could even edit the question to make it appropriate, then vote to migrate it. Although there may be concerns about low-quality migrations happening more often, in my experience when people feel a question is also too low-level for math stackexchange they will simply click the first option in the second menu (and alert the OP if they want to be nice), avoiding undesirable question migration.

Just for closure, here is my slanted summary of the discussion in the comments:

There are many clarifications and useful links for more information in the comments; see for example quid's discussion.

28
Migrating to Math.SE: too many close reasons
17
Comment template for questions more appropriate for MSE
34
Revamping the closure reasons
16
Redundant ways to close as off-topic/better on MSE
4
How are hot meta posts decided?
3
What's the difference between two off-topic flags?

11
How does migration work with this brave new MathOverflow?
16
Really minor complaint about the off-topic close menu
4
Migrate questions without disagreeing on their research status
7
Comment / Down-vote / Vote to close -- in what order, with what delay?
1
Migration from mathoverflow to other stackexchange sites
14
change in voting to close
Question feed