How to tell who created a tag?

(I might just be missing something totally obvious, that wouldn't be out of character.)

This is not possible, at least not with 100% certainty, see e.g. Can I find out which tags I have created?. The only exception is when a user gained a Taxonomist badge for that tag; that only happens for the first tag they create that is used in 50 or more questions, so it doesn't give the complete picture.

By carefully looking at all questions' histories with the Stack Exchange Data Explorer, it's possible to guess who created a tag, but it's not 100% reliable since there might be older questions using that tag but which have been deleted later on. Here is a query which does that. 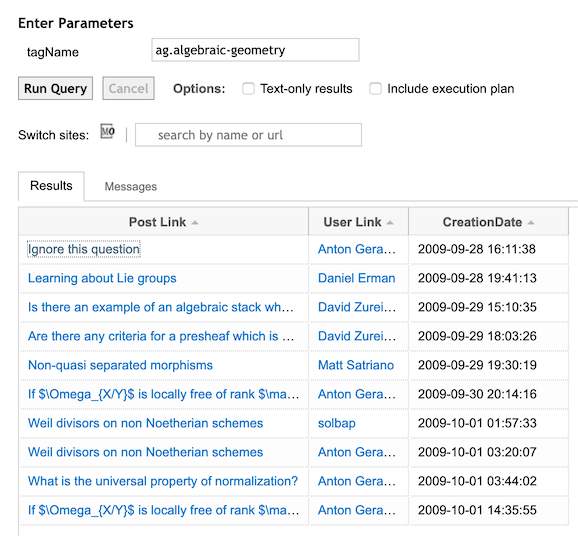 I will add also a link to the question on Mathematics Meta: Can you tell who created a tag. (Looking at the dates, it seems very likely that the query linked in the Glorfindel's answer was created by the answerer of this particular question.)

Sometimes you can find various related queries in MO editors' lounge. (MO editors' lounge was created by quid back in 2013. The intended purpose is to have a room related to tagging and editing.) For example, recently we looked at history of the tags (magma) and (magmas).

This is again by no means completely reliable, but creation of a new tag is sometimes mentioned in this chatroom. (At least the more recent instances.) Here are many examples of such messages. So, for example, you can search the room for messages containing the tag (technology) and you'll find out that there was a question on meta with this tag, but it was later removed by an automated script since it was used only on a single question for a long time. (This is done after 12 months on meta, 6 months on the main site. This script is another thing which makes finding the first occurrence of a specific tag from SEDE more difficult - since in instances like that, the tag is also removed from revision history. So no trace of such tags is left on the site or in SEDE.)

Not the answer you're looking for? Browse other questions tagged support tags .

8
How do I delete an accidentally created tag?
13
Reappearance of (topology) tag
Question feed