Is it possible to list all mathoverflow users from a given country?

Is it possible to produce the list all mathoverflow users from a given country?

You have tagged your post both (feature-request) and (support)

The feature-request part can be probably answered mainly by SE staff, which could say whether there are plans to implement something like this. However, there is also a similar feature request on the main meta: Filter users by country. So there you can see how it was received and maybe eventually also some decision whether or not it is going to be implemented will be given there.

Let me try to answer the support part of your question. (Which I understand as: What can be done with the existing tools without implementing new functionality?)

I think that ideal tool for tasks like this is Stack Exchange Data Explorer. (Since becoming part of SE network, MathOverflow is included in the database.) From the information about users available in the database, the Location in the Users table seems like the best choice for finding some information about country. (Of course, we will not find users which for some reason left this field blank or included something else there.)

You can create your own query or use some of already existing ones.

It goes without saying that you can find many already existing queries for searching by country in general or from one specific country. This is how I found the example with Ukrainian users.

Do not forget to switch sites before running the query, if you are interested in results specifically for MathOverflow.

Below is the result of this SEDE query. It's significantly more complicated than the one martin mentioned in his comment, largely because it was only composed within the last year and Martin's comment was from 2017 (though the link in his comment does have this new SEDE query listed in one of the comments too). 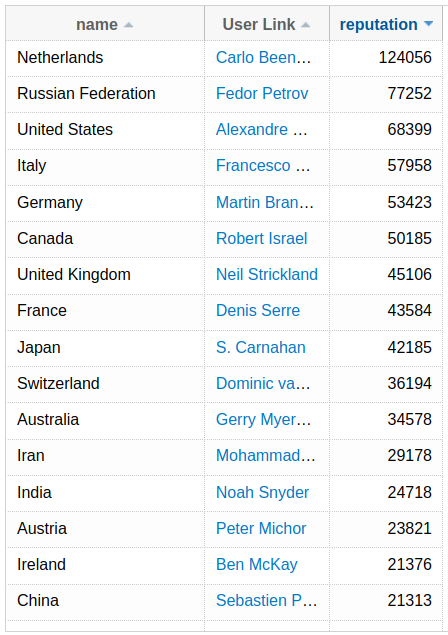 Like all the others have been saying, a SEDE query can only be as good as the information it has available, and in this case, for example, 3 users seem completely missing from the SEDE result:

Those three users do have their locations given in their profile, so it might be possible to scrape this data somehow and further improve the results of the above SEDE query, but we will always be limited by flaws and gaps in the information available.

Not the answer you're looking for? Browse other questions tagged support feature-request users .

12
Geographic distribution of people on MathOverflow
18
How long until MathOverflow will be part of the Stack Exchange Data Explorer?

12
Geographic distribution of people on MathOverflow
9
Lots of non research-level questions
3
On Notification Mechanisms in MathOverflow
1
Can one see the latest activities in "big list" questions without reading all answers again?
10
the number of on line users at a given moment
9
Is it possible to know the list of removed users?
1
Feature request: displaying all answers of a given user
3
Is there a way to `@` exactly one of two users whose names differ, if at all, only by whitespace?
Question feed