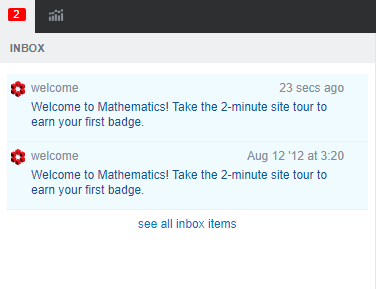 22
Customize the modal window for the first-time askers
50
How to write a good MathOverflow question?
47
"Stack Overflow Isn’t Very Welcoming." --- are we?
34
How can we visually differentiate MathOverflow from MathStackExchange within the constraints of the new design themes?
66
Why is "what is the difference between mathoverflow and math.stackexchange?" not prominently displayed?
23
Can the clutter of obviously off-topic questions be removed faster?
23
My question was closed on MO because it is not research level. Where should I ask instead?
27
Explicitly pointing out math.stackexchange when (new?) users ask a question
23
Should MathOverflow require registration to ask a question?
21
How do off-topic question askers find MO?
See more linked questions

27
Explicitly pointing out math.stackexchange when (new?) users ask a question
7
Should posts sitting in the "First posts of new users" review queue be hidden from view until they have been approved?
23
Should MathOverflow require registration to ask a question?
16
Should moderators in some cases remove a question from the network-wide hot questions list?
15
What should the modal window for first-time askers say?
9
Revising the help page on "What topics can I ask around here?"