Order of the tags at MO

I have seen a post suggesting that in SE network a tags for the question should be shown ordered by the popularity (i.e., by the number of questions): Are the tags shown in a particular order?

But when I view this question I see tags in this order: quandles, abstract-algebra, lo.logic, reference-request. The tag quandles only has 5 questions, so according to the rule I've mentioned above it should be shown last.

Is MO behaving differently? (If yes, why?) Or is this a bug? 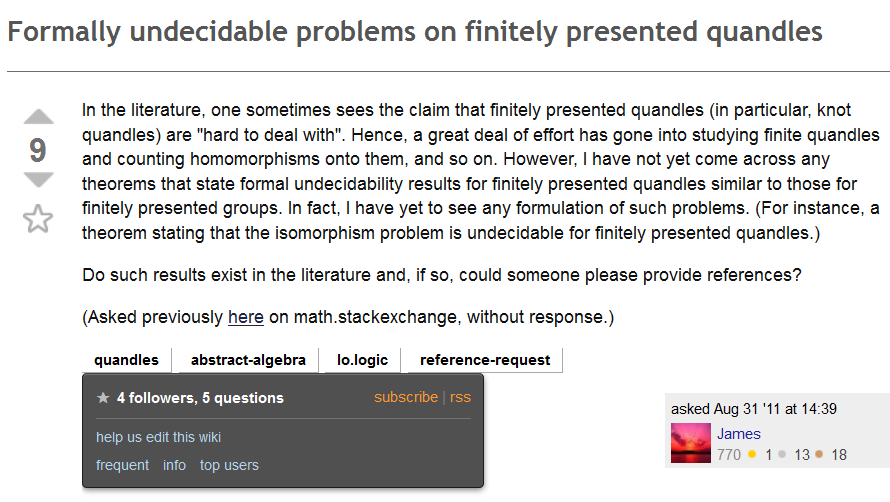 The behavior now is that tags are ordered by popularity (at the time of posting) also on MO, the behavior earlier was that they were ordered in the order they were entered. This was like this on SO too, but was changed something like four years ago and then a script was run to change it globbaly; see Possible bug in retagging

By contrast, this old ordering appears to never have been changed globally for MO to the new one, thus there are still questions with the old ordering. However, when the tags are 'touched' in some way, by adding a tag for instances, the ordering changes automatically. (The ordering seems to be done only when writing to the database, once they are there they are simply displayed as they appear there.)

I am not sure if this was preserved by design, or if it was an oversight when moving to the network that should be fixed.

In any case, it is not a bug in the current behavior, but legacy from older behavior.

In addition, but this is not the current case and secondary, it is also possible that in some cases the ordering deviates from the current popularity, since the popularity of the tags changed since the question was last edited. But this should be small effects only. Still one could consider this as reason to run some reordering script from time to time (perhaps this is in fact done, but did not yet happen for MO, not sure).

5
The mystery of the Strunk & White badge
2
Why does (moderators) tag on meta behave differently from other tags?
12
Should we have a tag for second-order logic?
Question feed